Rabies is a particularly concerning disease because it is not only dangerous to animals, but to humans as well. In the developed world, human deaths from rabies are relatively rare, with only twenty three reported cases in the United States over the past decade. But it does happen and earlier this year a six year old boy unfortunately died after contracting rabies from an infected bat. Increased awareness, animal control, and good vaccination protocols have lead to steadily declining fatality numbers since the 1970s. In other parts of the world, however, rabies continues to be a very serious problem accounting for thousands of deaths per year, mainly in Africa and Asia.

The causative agent of rabies is a virus that lives in the nerves and saliva of a symptomatic rabid animal. Animals and humans become infected following a deep scratch or bite from another animal with rabies. Most cases worldwide are transmitted via dog bites. In the United States, more than 90% of reported cases are from wildlife, with bats being a major reservoir for the disease. After the initial infection, the virus enters the peripheral nervous system where it then travels to the central nervous system. Once in the brain, the virus causes encephalitis, or inflammation. By the time symptoms can be seen, treatment is ineffective and mortality occurs in 99% of cases.

In animals, there are two forms of rabies: paralytic and furious. In the first few days of clinical signs, only mild neurologic signs are demonstrated. After this early stage, most will progress to either a furious or paralytic stage, although some will die without showing any other major symptoms. Furious rabies is what most people generally think of when they imagine rabies. It’s characterized by behavioral changes such as extreme aggression and attack behavior. Paralytic rabies, on the other hand, is characterized by weakness and loss of coordination.

The only way to definitively diagnose rabies in animals is through identification of the rabies virus in the affected brain. Therefore, the test can only be performed postmortem. The test is called a direct fluorescence antibody test and is performed in state approved laboratories. Over one hundred thousand animals are tested each year in the United States with about 6% of those found to be positive.

Because the only way to test an animal for rabies is to euthanize it, a quarantine system has been developed in cases where a domesticated animal has bitten a human so that an animal is not needlessly put down. The dog or cat involved in the bite incident is required to be quarantined for a period of ten days where they will be watched for signs of rabies. If they do not show symptoms during that time frame, it is unlikely that they were able to transmit rabies at the time of the bite. 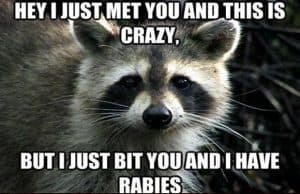 When deciding what to do when your pet is exposed or possibly exposed to rabies through contact with a rabid animal, their vaccination status makes a big difference. When a dog or cat are exposed to rabies and up to date on their rabies vaccination, they should receive a booster shot and then be kept under quarantine for 45 days. If the animal has had their vaccine but are overdue, they should receive a booster shot at time of exposure and then should be quarantined for 4-6 months. However, if the animal has never had a rabies vaccination, euthanasia is strongly recommended because the risk of developing disease is so high. Keeping your animal up to date on their rabies vaccine ensures they will never have to endure a six month quarantine, even if bitten by a confirmed rabid animal.

The goal of this blog post is to show why vaccinating your pet against rabies is necessary. It is required by law in most states, and the only companion animal vaccine legally required in Virginia. Not only is rabies 99% fatal to animals, but the human health risk is similarly dire. Even if your animal is “indoor only,” the largest reservoir for rabies in the US are bats, which find their way into homes all the time. There is also no guarantee that your pet won’t accidentally escape your home at some point.

The rabies vaccine is a killed vaccine, and is one of the cheapest and most widely available vaccines for animals. The first one is administered no earlier than three months of age. A second dose is then administered no later than one year after the first dose. Booster vaccines should be administered every three years after that. There is a vaccine made for cats that is a non-adjuvanted vaccine which carries lower risks of side effects. If you will remember from my last post, an adjuvant is a substance added to a vaccine to make the animal’s immune response stronger and the vaccine last longer. The adjuvant in the rabies vaccine has been associated with the development of tumors called sarcomas in cats so some owners elect to vaccinate with the non-adjuvanted vaccine instead.

In conclusion, vaccination against this fatal, zoonotic disease is easy, safe, cheap, and usually required by law. Do your part to help continue the steady decline of rabies and vaccinate your pets against it!

Spotswood Veterinary Services LLC is a family owned and operated mobile veterinary clinic based out of Spotsylvania, VA. Our goal is to provide quality, compassionate care at an affordable price.